May 12, 2016:  I’m in Vancouver, B.C. this week for the United Way Worldwide conference.  It’s been GREAT being back in the Pacific Northwest — for all too short a stay.  I haven’t been here since 1997 and it reminds me of all the ways in which it’s different than Seattle or Portland and the differences.  But that’s another post for later…

Other than smelling the tangy salt air and smelling the fir trees, it makes me think of ghosts. Ghosts of the life we used to have up here in the Pacific Northwest, and the literal kind.  Read on. 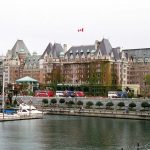 Not long ago we said goodbye to Cindy Boyd.  She’d been fighting the good fight against atypical lung cancer for over 9 years.  Her husband Bob introduced me to Karen, and since Karen worked at Sooner Federal Savings & Loan, introduced Cindy to Bob.  I remember the first time they met, at a steak house where Burn Co. is today — you could definitely see the sparks fly.

Before and after they got married, we were thick and did lots together, and they even came up and visited when we lived in Olympia, WA in 1997.  Which brings to the story that this trip reminded me of.

When Bob and Cindy were visiting, they wanted to do BOTH Victoria and Vancouver, B.C.  This was the visit when we realized that for all future guests from Oklahoma, it’s a bit audacious to do both.  The two places look “close” on a map, but as Karen said: there’s water, and mountains, and other things that keep it from being a quick jaunt. Olympia is about 70+ miles south of Seattle, but we agreed to the following plan for the last weekend of their visit:

…not terribly wise or relaxing, but we were young and stupid.

So the first part went according to plan — Bob and Cindy go up to Seattle and we leave work early with bags packed, etc.  But there was a MASSIVE wreck/slowdown on I-5 in which NOTHING moved.  Karen remembers watching a piece of trash on the side of the road for almost an hour.  We sat forever, and got to downtown Seattle so late that it would be iffy whether we’d make it to Anacortes for the last ferry, which left at 10pm.   Rather than a good meal, we grabbed some drivethru and I drove like a bat outta hell.

As you can guess, we didn’t make it.

Plan B: there was the BC Ferry terminal in Tsawassen, just inside Canada, that had ferry service to Sidney.  We RACED further up I-5 northward.

We didn’t make that one, either — it was pulling away just as we arrived.

Plan C: there was another car ferry leaving almost an hour later to Nanaimo, at 11pm.  Where’s Nanaimo, you ask?  Same island, but midway, and at least 1.5 hours away from Victoria.  That’s after an almost 3 hour cruise on the ferry.  I’m sure it was a beautiful transit, but it was dark.  Darker than dark, and a bit foggy.  Most of our passengers were Coast Salish folk who were going home after working on the mainland.

So when we get off the ferry it’s 2:00am Saturday morning.  There’s one road south that wasn’t particularly big as it went up, up, UP and over the mountain.  I’m balancing driving fast with not seeing due to fog, and thinking that a bad turn could send me down into endless trees.  Or a cliff.  Or hitting a deer.

We made it to the Empress by 3:30am, and decided that checking out at 12:00 noon (in 8-1/2 hours) would not be a good idea.  We decided to stay Saturday night in Victoria also and see all the provincial capitol had to offer.

It was a great day — shopping and wandering, high tea at the Empress, drinks at the Bengal Club.  That night we met Frank, our horse-drawn carriage driver from Prince Edward Island.  Bob went in to the Empress, bought a bottle of champagne and borrowed 4 glasses.  It was a great evening.

That night, Bob woke up unexpectedly in the middle of the night, and saw an old man in boxers, head in hand, sitting on the rim of the bathtub in his bathroom.  When he looked up at Bob, Bob screamed and he vanished.  A ghost encounter in the Empress!

The next day we went to the Butchart Gardens, and took the ferry from Sidney to Tsawassen.  It was a beautiful day, and I remember Cindy looking around the straits and telling me that she cruised these waters in a relative’s sailboat (uncle?) after her father died.  Of the same sort of atypical lung cancer that claimed her those many years later.

I remember in her direct style asking:  “Gary, when are you and Karen going to have kids?”

We got them to their hotel in Vancouver, and after awhile we said goodbye and headed back on the almost 4 hour drive back home.