I don’t know if most IT practitioners start off as Sci-Fi fans, but ever since I was a young reader, I’ve loved science fiction, but not to the point of being rabid or having a single unrelenting focus.  I remember in 4th and 5th grade devouring all the Jules Verne books, which I loved equally for their 19th-century language as for the steampunk science.  My grandfather was my encouragement also — he had a collection of pulp sci-fiction books (from authors like Edmund Hamilton) from the late 40s/early 50s, and some of the early 1970s Hugo award-winning short story collections.  Don’t forget the original “Star Trek.” There was a hope in those early books and media that technology and science would always save the day, and humanity’s better angels would guide us forward.  I still feel that way — I think I was one of the only people who loved the Disney/George Clooney “Tomorrowland” for rekindling that feeling.

Maybe because of that beginning, I’ve had a love/hate relationship with the dystopian science fiction of the 1980s to the present:  “Blade Runner”, the “Alien” saga, even the “Firefly” series.  If we imagine a gritty ugly future — that’s what we’re going to get.

Over the Christmas holiday, I finally had a chance to pick up a copy of Neal Stevenson’s “The Diamond Age,” 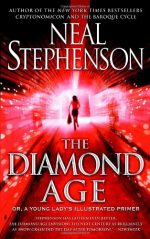 which came out in 1995.  I found a $2.50 copy at a resale shop.  The book’s premise always interested me, and I always figured I’d read it eventually.

I’d never before read Neal Stephenson’s fiction; only his 60-page article in WIRED magazine on the rise of broadband and transcontinental fiber.  Being from Tulsa (the home of Vyvx/WilTel that first put fiber optic cables in unused oil pipelines), this has long been a fascination of mine but that’s ANOTHER story…

I’m not going to subject you to a review: there are plenty of folks out there who can do that. Instead, I want to talk about the parts of the story that, after years of wondering, I saw as places where the book perhaps predicted things like iPads and iPhones and how we use them.  And places where the future in 2017 doesn’t measure up.

The main points: a brilliant Neo-Victorian developer creates “A Young Ladies’ Illustrated Primer,” a device intended to educate and guide the young granddaughter of the ruling class towards a proper and morally-centered grounding in adulthood.  The device “very much like a book” falls into the hands of a gutter child from a high-poverty/absent father/single mother/dysfunctional family.  In addition to teaching her to read, it teaches her how to protect herself — self defense from mother’s endless army of lowlife boyfriends, and eventually to running away with her only ally, her older brother. They get separated, and meet again years later on his deathbed. Very Dickensian.

But the part that interested me enough to seek out this book is where the Primer gives her what she needs to survive and better her station.  Years ago, the notion of outsourcing a child’s moral education to an iPad on steroids, even when this is an improvement over a nonexistent family structure, seemed unthinkable.  But now, seeing the high adoption rate of personal tech in kid’s lives I question whether Western society wouldn’t be well served by something embedded within a child’s screen of choice…an overlay…or some bit of high-minded control that would gently direct one’s choices until one could make informed ones.

Putting it to modern means, perhaps a subscription that follows one’s Google login on whatever device you connect on.  Knowing that kids mature intellectually at different speeds and ages, you could of course “test out” at various points, with increased access to the Internet’s bounty as one develops the ability to discern fact from fake.

In my scenario, the highest level (when one is let loose upon the world) is Citizen: where all the (currently untaught) lessons of civic responsibility, history, awareness of the interconnectedness of everything, and empathy are demonstrated.  I know of a few adult voters who wouldn’t be able to pass such a test.  A true capstone course for life.

Without giving away too much plot, in Stephenson’s story there become 2 versions of the Primer — a guided version in the Original with a human, Motherly character providing something beyond just instruction, and thousands of entirely computerized editions.  But each variant nonetheless improves the lives of their owners, in ways unexpected from the original developer intent.  Just like life…

One comment on “Science Fiction as Predictor and Guide”