For those of you who know me/us well, you know that we’re generally homebodies…particularly in 2016, when (1) our home was for sale, (2) we had to find a rental in the Jenks district, and (3) we had to move/clean/prep our old house for the rental market when time ran out this year.  So there was no real vacation in 2016 — our consolation was a Fall Break trip to Saint Louis, which was nice in all kinds of ways, but…still something was lacking. 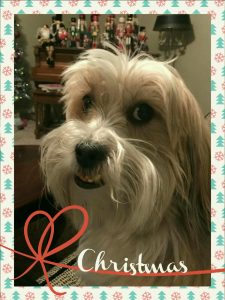 So over the Christmas Break we decided to go down to Universal Studios Florida and the Wizarding World of Harry Potter (more about that in a separate post), which meant…what to do with the dog and cat for longer than a couple of days?

Usually, when we have overnights due to gymnastics trips we’ve put our dog Polo at Camp Bow Wow, and our cat Rosie fends for herself with extra rations.  That works out “fine,” and Camp Bow Wow has webcams where we can pop in and see how Polo’s doing.

The webcams confirm what we already knew: Polo is a People Dog — he doesn’t socialize much with other dogs.  Instead, he hangs around the caregivers when they come in to the day room, sitting at their feet, etc.  If they’re not in there, he’ll just lay down. Just like he does at home.

Armed with this data, we thought we’d try leaving the animals at home and having someone come in.  That someone is Sit and Stay Tulsa, in the form of Leslie and Wes Rowell and their team.  If you’re ever in need of dog or cat sitters, or both, I cannot recommend them highly enough.

For only a bit higher than having Polo at the kennel, Leslie came by 3 times a day — and Polo got a walk each time.  Food was added to, Water changed, litter box cleaned, and lights and signs of habitation were switched around.  Rosie, the tough customer that she is, basically made herself scarce — hiding in the closet, and never warming to the Rowells (she barely warms to us most times).

The amazing, over-the-top customer service experience:  The pet gate that separates the kids was missing a piece from the move.  I kept hoping it would turn up, but it hadn’t yet, and I’d kept one side closed with a mesh of zip ties.  Since Polo and Rosie had nothing better to do but taunt each other, Polo squeezed through and even brought the gate down once — I can only imagine what that was like.  Wes Rowell went above and beyond and got a dowel rod from Home Depot and FIXED the pet gate.  Tranquility and harmony (or as close we ever see) was restored, and we came back to the same number of pets as when we left.