I’ve asked this question back over Thanksgiving weekend on Facebook:

Parents: Over the long holiday we’ve fully implemented the OurPact app to control/curtail screen time for Pi. Anyone else using it? Any advice on achieving a happy middle ground between total block and total open?

Like most modern kids, P is a voracious acquirer of information.  She’s always had a single-minded focus towards whatever she’s interested in, and that’s made her into an excellent reader, and a great speaker.  For which we are understandably proud.  An example: since gymnastics has come into our lives she’s been pretty good at time management — she’ll get her homework done at gym before class starts so there’s rarely any homework when she gets home. 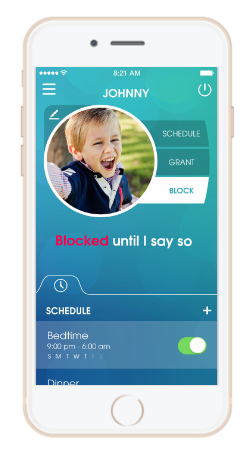 But one place where we’ve had a bit of stress has been in the area of managing screentime.  As she gets older and her buddies all text and have Instagram accounts, we’ve taken to charging the iPad and iPhone in the kitchen overnight, so the temptation of late-night texts or notifications won’t “beep” away sleep.

When she started at Jenks this Fall, one of the online notices that came in concerned OurPact: an app to control a child’s screentime.  It came as a PDF contract amid a flurry of flyers that they send weekly, letting us know what’s coming up, etc.  The contract between child and parents does things like asserting screentime boundaries, agreeing that we, as parents, have the final say and that we don’t bring the hammer down without cause.  We both signed back in August or September, and only occasionally had to refer to it…hoping that would be sufficient.

By and large, it has — but anything can be taken to extremes.  Her “extreme” may not be much, but it’s too much for us.  So I installed the OurPact app, and it’s worked pretty well:

So when 8:45pm happens — every app and game on your child’s device that has internet connectivity VANISHES from the screen.  One can’t even take a photo: the Camera app is also gone.  They all come back the next morning at 6:45am, but the icon placement may be different from original — it’s a bug they’re working on.

They’ve left iMessage text capability (working on that one also, they say), which I’m actually fine with…good for security when one doesn’t have full phone functions — P does use it to contact us after school, at gymnastics, etc.

You can also do a manual, full-on Block Until I Say So.  I haven’t had to do it often.

That first long weekend was a bit uncomfortable, as P was going through withdrawal and adjusted to the schedule.  But then, an amazing thing happened:  she started using her creativity again, interacting with us and the world.

That weekend we also realized that she isn’t addicted to her electronics — but just that she was BORED with all her books.  So after a hefty expenditure at Barnes & Noble, she was back to her old self again.

4 comments on “Moderation in all things. Especially screentime…”