In his talks, Tom Peters used to ask his audiences “What is the oldest continually operating organization you can think of?”

The answers were (a) the Catholic Church, and (b) Medieval Universities, like the University of Oxford.

Which begs the Question:  Why do no businesses have that kind of longevity?  One could argue that Free Enterprise got a late start in the 18th Century, with Adam Smith and The Wealth of Nations.  Or you could also offer that thinking beyond one’s self-interest (eternal salvation vs the acquisition of knowledge) is a more long-term viewpoint than just how much money you make this year, or in your lifetime. 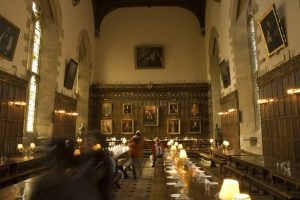 My areas of work stewardship have a foot each in the camps of the ephemeral (Information Technology), and in the long-term: taking care of a couple of joined buildings — one built in 1957 and one in 1988.

So in addition to the usual, yearly maintenance and upkeep, we’ve started thinking about what needs will we have going forward on a longer timeline:

Thankfully, we have an endowment that allows us to pull a bit of interest to cover building-related repairs.  In that way also we’re more like an organization that prepares for a longer life than most.  Being that we’ve been around 95 years, we’re on our way.

Stewart Brand in his book How Buildings Learn related the story of the Oaks of the New College, Oxford.  From the Atlas Obscura posting:

A century ago, some busy entomologist went up into the roof of the dining hall with a penknife and poked at the beams and found that they were full of beetles. This was reported to the College Council, which met the news with some dismay, beams this large were now very hard, if not impossible to come by. “Where would they get beams of that caliber?” they worried.

One of the Junior Fellows stuck his neck out and suggested that there might be some worthy oaks on the College lands. These colleges are endowed with pieces of land scattered across the country which is run by a college Forester. They called in the College Forester, who of course had not been near the college itself for some years, and asked him if there were any oaks for possible use.

He pulled his forelock and said, “Well sirs, we was wonderin’ when you’d be askin’.”

Upon further inquiry, it was discovered that when the College was founded, a grove of oaks had been planted to replace the beams in the dining hall when they became beetly, because oak beams always become beetly in the end. This plan had been passed down from one Forester to the next for over five hundred years saying “You don’t cut them oaks. Them’s for the College Hall.”

The story, while not entirely accurate, shows our responsibility doesn’t just cover the stuff we talk about in our Annual Salary Review…we have to consider the Long-term of our organizations and transmit this info down to our successors.